Nintendo has entered a strange partnership with Mercedes-Benz which means that a scaled-down version of Mercedes' GLA will be appearing in a future DLC for Mario Kart 8 in Japan. The very real car will join the wealth of other fictional but much-loved vehicles currently present in the game.

Although Nintendo has used product-placement techniques in games before, this is perhaps the most noticeable to date. Nintendo president Satoru Iwata did say in January that the company was going to aim to 'actively expand our character licensing business' as part of its wider program of change to its business model but this seems to be taking that statement rather to extremes. 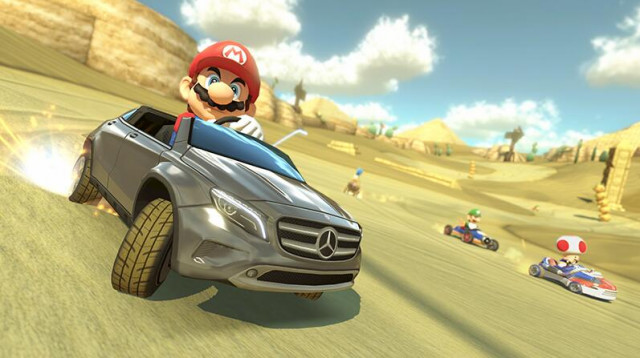 The two companies have even produced a bizarre TV advertisement which features the car being used to play Super Mario Bros. and a real Mario driving the GLA; the video is set to the classic Mario theme tune. Mercedes has also built a special website with Super Mario Bros. graphics, similar to those used in the video.

The DLC will be available for free to Japanese players this summer, according to Japanese gaming site Famitsu. A Mercedes-themed Mario Kart 8 tournament will also take place this autumn, again, in Japan. Of course, players of old versions of Mario Kart on old consoles won't get the update and indeed Nintendo closed down multiplayer functionality in their games, including Mario Kart, for DS and Wii last month.

Eurogamer managed to ask a representative from Nintendo UK about the possibility of the DLC reaching other markets but Nintendo's only response was "we will be able to announce in the near future." That hints that we could see the Mercedes-Benz GLA in Mario Kart elsewhere in the world soon.

The question really though is do we want real, licensed car brands appearing in what is famed for being a very lighthearted, casual game? The GLA is designed as a stylish, urban SUV and doesn't seem to fit very well with the bouncy, colorful go-karts and bikes of the Mario world.