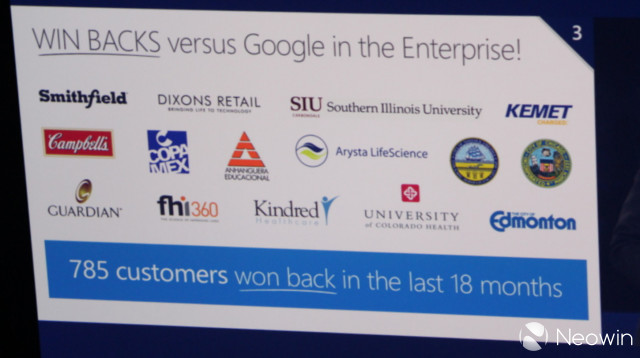 Microsoft loves the enterprise - it's where they make quite a bit of their revenue and it's where they have a significant presence in productivity software as well as desktop operating systems. Of course, Google would like to cut into Microsoft's share of the market at the enterprise level but at WPC14, Microsoft took a bit of time to show that many clients who have switched to Google are switching back.

In fact, in the last eighteen months, 785 organizations who tried out Google's suite of services have now come back to Microsoft. It goes without saying that switching between Google and Microsoft is not a trivial process as the expense incurred - both financially and in terms of lost productivity - can be considerable. So, for a company to switch back from Google, they must have been quite unhappy with the services to make the transition again, in what is likely a small time window.

What we would love to know, of course, is how many customers have left Microsoft for Google. The figure of 785 customers is almost meaningless without that context.

Certainly, Google has it much easier than Microsoft in terms of support for legacy software as they are a cloud-only service provider which allows them to push out new features faster. Microsoft's mix of on-site and cloud products makes the support cycles for their services generally longer which is one reason why corporations like Microsoft services. Additionally, it is this mix of product offerings that makes Microsoft's portfolio of applications incredibly strong.

While 785 may not seem like a high number, remember, these are enterprise customers and each company can be composed of hundreds, if not thousands, of employees.