Microsoft continues to make its free Office Web Apps more useable for folks who don't want to pony up the money to spend on a full Office 2013 install. This week, the company revealed that the Word Web App has now added the ability for its users to view PDF documents. 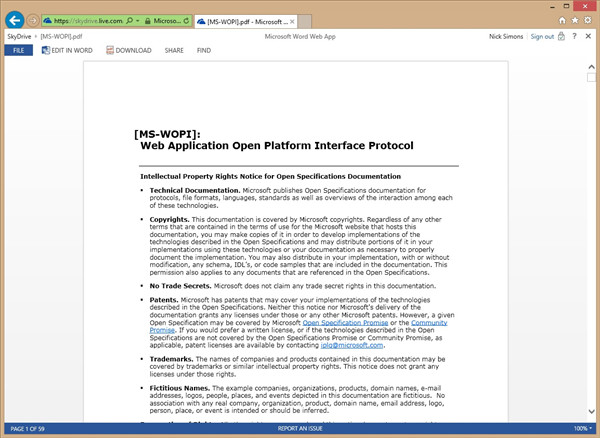 In a post on the Office Web Apps blog, Microsoft says this feature has been added for people who use SkyDrive, Outlook.com and Office 365. It states, "PDFs attached to mail or stored in SkyDrive are quickly viewable in the browser regardless of device or whether you have PDF viewing software installed." SkyDrive users can also convert PDF files viewed in the Word Web App into Word documents that can then be edited. This feature creates a whole new file; it does not change the original PDF document.

Microsoft also tried to add PDF viewing from the Word Web App for SkyDrive Pro and SharePoint Online users. However, it has since encountered some issues with this feature and has decided to temporarily remove PDF viewing from those two services until a fix can be implemented.

This new update to the Word Web App follows some new additions that went live on the Excel Web app last week. Microsoft has plans to add even more features to its Office Web Apps family in the coming weeks and months, including real time co-authoring inside those apps.