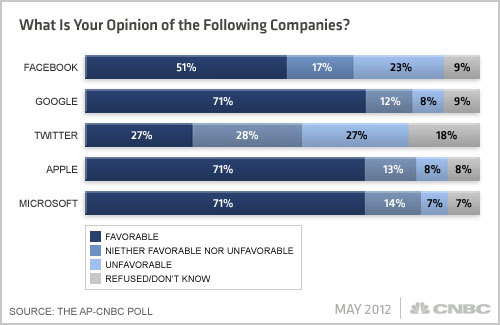 Facebook may be the hot tech company of the moment and just days away from its IPO launch but Facebook still lags behind Microsoft in terms of its overall favorable impression. A new survey from CNBC and the Associated Press reports that 51 percent of people who were contacted had a favorable impression of Facebook.

56 percent of those who were surveyed said they have a Facebook page and 3 out of 10 people say they use Facebook every day. However, 59 percent of people don't trust Facebook with being able to protect their private information.

54 percent also don't feel safe in terms of purchasing goods or services via Facebook and 83 percent of the people who were surveyed claim to have never or hardly ever click on an ad on Facebook.