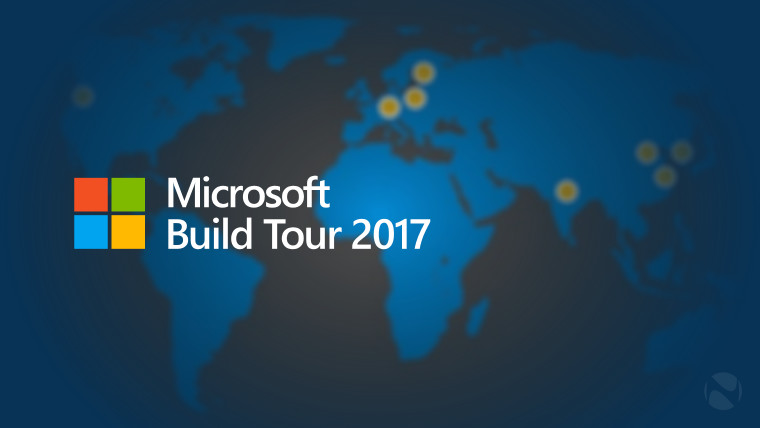 Last week, Microsoft hosted its annual Build developer conference, making all sorts of announcements about its products and services, and outlining many of its plans for the coming months across Windows, Office, Azure, Visual Studio, OneDrive, and more.

As in previous years, Microsoft has now announced details of its upcoming Build Tour, promising to "bring the best of Microsoft Build right to you"... as long as you're near one of the eight cities around the world that the tour will visit:

"The Microsoft Build Tour is for all developers using Microsoft platform and tools," the company said today. "We will cover a breadth of topics across Windows, Cloud, AI and cross-platform development. We will look at the latest news around .NET, web apps, the Universal Windows Platform, Win32 apps, Mixed Reality, Visual Studio, Xamarin, Microsoft Azure, Cognitive services and much more."

For the first time, the Build Tour will be a two-day event in each city, except for Munich, where it will only last a single day. "You can decide to attend just the sessions on the first day," Microsoft said, "or sign-up for a deep (and fun!) hands-on experience on the second day." Here's what to expect:

Day 1: Full day of fast-paced, demo-driven sessions, focusing primarily on new technology that you can start using immediately in your projects, with a bit of forward-looking awesomeness for inspiration.

Day 2: Full day hackathon where you’ll use the latest technologies to build a fun client, cloud and mobile solution that meet the requirements of a business case given at the beginning of the day. Seating is limited for Day 2, so be sure to register soon!

Microsoft added that "in most locations, on both days", it will also offer a Mixed Reality experience booth, offering attendees some hands-on time with HoloLens and some of the new Windows Mixed Reality headsets coming later this year.

However, Microsoft has also made it clear that "space is limited" at all of these events, so if you're thinking of attending, make sure you register soon.

Speaking of Build tours, Rich and I toured the Hub at Microsoft's Build 2017 developer conference last week - check out our video from the show floor here... and be sure to let Rich know just how cool those Skype sunglasses really are.