In an effort to further improve organizational productivity, Microsoft has announced new "people experiences" for Office Delve. One of these is a "Praise" feature which will allow colleagues to show appreciation for each others' work, boosting their morale. The company is also integrating the ability to create modern pages in SharePoint Online and add Favorites from across Office 365.

Microsoft has described the Praise feature in the following words:

With the new Praise feature in Delve, you are now able to send publicly viewable praise to your colleagues. In addition, an email is sent to their manager to make them aware of the individual’s efforts. The praise appears in Delve on the recipient’s profile, and colleagues can click Like to increase the recognition. We know users will appreciate its ease of use and companies will benefit from the power of it being used.

Users will now also be able to utilize the new authoring canvas accessible via the Office Delve tab, which will allow them to view and edit pages, and auto-save them. It's now easier to embed documents, videos and images from OneDrive for Business, SharePoint Online Document Libraries, Office 365 Video Portal and your hard drive. The design has been improved to make it more beautiful and responsive, while keeping everything aligned, minimizing the use of extra tabs and windows. 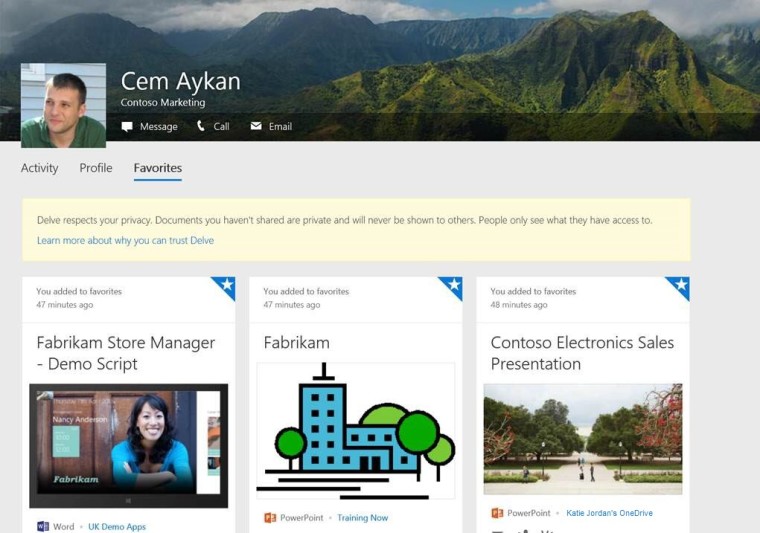 Regarding its new "Favorites" feature, the Redmond giant states:

When you see something in your activity feed that piques your interest, you can hover over the card and click the star in the upper-right corner. When you want to get back to your favorites, you can visit the new Favorites tab in your ME view in the left-hand navigation. Once you’ve read or shared it, it’s just as easy to remove the item from your Favorites tab.

The update to Office Delve is first rolling out for customers in the U.S. and will officially be available to everyone over the next few weeks. Microsoft states that it is impossible to turn off the "Praise" feature in the current release of the software, but the company is considering giving administrators the option to toggle this option as they see fit. Microsoft also states that it is currently also testing methods to improve the Delve user interface by allowing customers the option to customize their profiles. The company also states that if you'd like to see new features added in the future or if you have some feedback regarding Delve in Office 365, you can head over to the Customer Feedback forum.