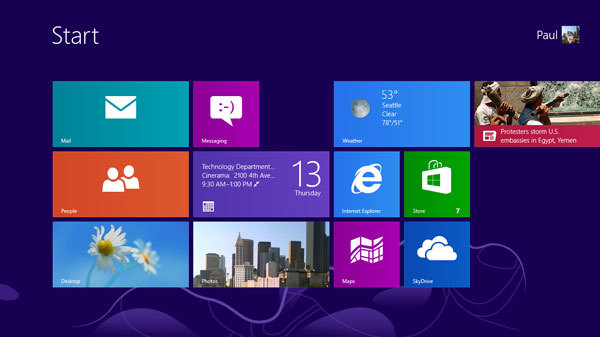 While we know that Microsoft co-founder and Chairman Bill Gates is "very pleased" with his company's upcoming Windows 8 OS. Now, one of the other major co-founders of Microsoft, Paul Allen, has given his thoughts on Windows 8, and while he is critical of some aspects of the OS he generally is also happy with what Microsoft has created.

In a recent post on his official website, Allen says that he has been using Windows 8 on both a regular desktop PC as well as on a touch-screen enabled Samsung 700T tablet. He states, "In summary, I'm excited about Windows 8 and am confident that existing Windows users will feel the same after they have had a chance to use it." He also praised the touch screen "Modern" interface, adding, "I found the gesture navigation on the tablet to be quite satisfying and responsive. And in general, I find Windows 8 to be snappier and more responsive than Windows 7."

However, he did also find other aspects of Windows 8 to be, in his words, "puzzling." He lists a number of his issues with the OS in his post. One of them was that he felt that users might sometimes switch between desktop and "Modern" user interfaces without meaning to do so. Allen wrote:

For example, if using Outlook running in Desktop mode, when I click a link from an email to a Web site, I clearly intend for Internet Explorer to open in Desktop mode as well. But Windows may instead associate URLs with the Windows 8 style version of Internet Explorer. If so, clicking that link would open the Web page without the full array of IE features. Further, this would also require that I then switch back to Desktop mode and resume what I was doing previously in Outlook.

Allen feels that people who work with Windows 8 on a desktop PC environment will be able to quickly get used to the new OS "without much trouble." He seems particularly hyped about the prospect of Windows 8 on touch-based hardware, saying, "Touch seems a natural progression in the evolution of operating systems, and I'm confident that Windows 8 offers the best of legacy Windows features with an eye toward a very promising future."