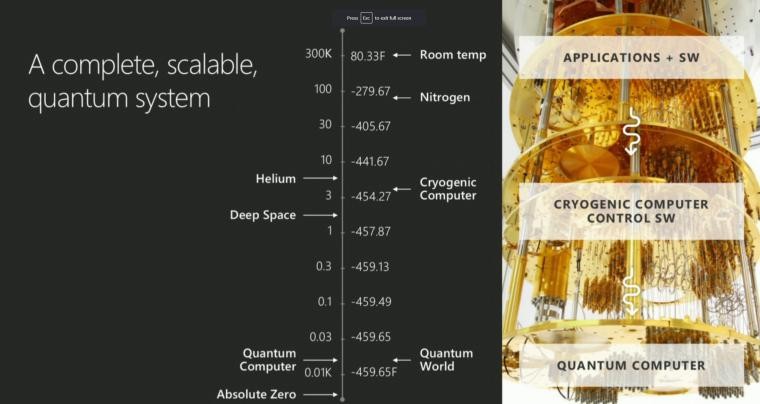 Today, at its Ignite conference, Microsoft discussed its work into quantum computing. It has assembled a team which specializes in maths, physics, and computer science to help advance its work. The team has been advancing what's possible with topological quantum computing, a method with significantly lower error rates compared to other quantum methods.

Microsoft says the following about the “dream team” that it has assembled to work on quantum computing:

Over more than a decade, Microsoft has made massive investments in quantum research and development while assembling the quantum-computing dream team. Today, the team comprises some of the greatest mathematics, physics, and computer-science minds in the world, and their work is bolstered by the combined talent of people across universities, industries, and more.

With its team, Microsoft has been hard at work building a quantum computer which operates at very low temperatures, and on the software side has built a software stack in order make applications for the system. This has involved building a new programming language which speeds up the development of quantum applications and integrating it into Visual Studio. With it being integrated into Microsoft’s flagship IDE, it has debugging and simulation support with Azure that lets you simulate up to 40 qubits.

Microsoft’s developments are finally moving quantum computing from the theoretical into the practical realm where we don’t need to try to understand weird concepts to describe exactly what’s possible with quantum computers.