In 2012, Microsoft added the middle "Snapshot" column to its Bing.com search results. While it was used at first to showcase movie, hotel and restaurant reviews, the Snapshot column expanded its reach in December to offer up more information on specific people and places that users searched for on the site.

Today, Microsoft announced a further expansion of the information displayed in the Bing Snapshot column. In a post on the Bing blog, it states that when a search for a work colleague is now entered, Snapshot might reveal where he or she went to school and other professional accomplishments. 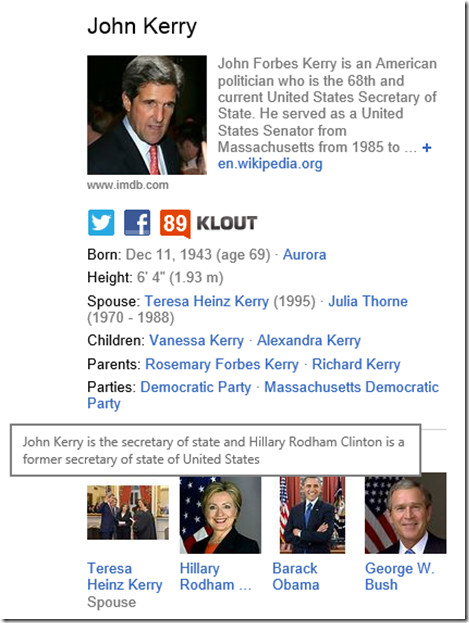 More information about certain celebrities and political figures will now be visable in the Bing Snapshot column. Microsoft states:

For example, when searching for John Kerry, you will see summary information, alongside photos of Hilary Clinton, President Barack Obama and former President George W. Bush. When you hover over the "People also search for" photos, you'll see an explanation of how each is related to that celebrity, and for certain celebrities you can even see current and former flames.

When searching for a specific town or city, the Bing Snapshot column will now display items such as "population, nearby airports, attractions and other cities people searched for." Microsoft has added in support for people who want a specific question answered via Snapshot, such as "What is the highest mountain in the world?"