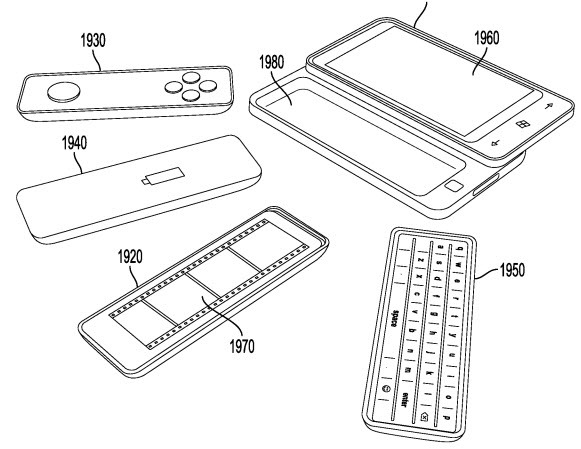 As smartphones get more and more popular, they also add more functions and features. Smartphones can now serve as a camera, a PC, a media player, a game console and more. But designs for smartphones sometimes don't allow for the full use of those features, especially when it comes to games. Now a newly revealed patent by Microsoft shows that the company is exploring the idea of having swappable hardware accessories for future smartphones.

The patent, filed back in March 2010 but published this week by the United States Patent and Trademark Office, describes a future phone that would have a detachable slider. Such a phone could have a feature that would allow it to accept one of several different accessories. Microsoft suggests that those secondary parts could include.  "... a battery, a virtual keyboard, one or more game controllers and one or more devices that can operate as mobile phone handsets. The first device can wirelessly communicate with more than one second device simultaneously."

While there's no indication that Microsoft is actively working on such designs for future smartphones it's clear that the company is at least thinking about how such devices might evolve in the years to come.