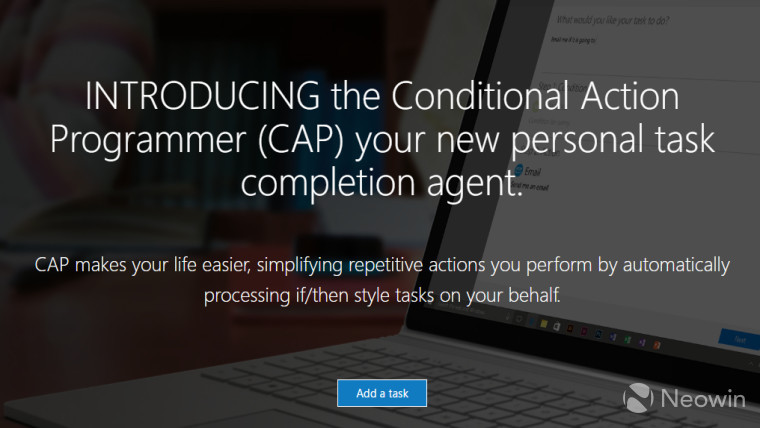 Last month saw the release of Flow for iOS, Microsoft's business-oriented version of IFTTT which allowed users to mash up multiple services and automate actions between them. These things included copying files back and forth between OneDrive and Dropbox and even moving leads between Salesforce and Dynamics CRM.

It seems the Microsoft Research team has decided to take users on a different journey, however, with the release of CAP - or Conditional Action Programmer. CAP is another IFTTT-style app, as the name aptly describes, that isn't limited to business-oriented sources. Indeed, the main examples listed on the homepage include things like "Text me the forecast every week" and "Save article to pocket."

The highlight of CAP, though, is that it features natural language processing through the LUIS project. If you'd like to create a new task, you can simply type something like "Send me an SMS if $MSFT is dropping" or "Remind me to get my car washed on Wednesday" and CAP should interpret the sentence, make the correct connections, set the reminder, and off it goes.

The services that appear to be supported right now include:

And the list is only likely to grow. Under the "connections" section - what the CAP team is using to refer to the various services integrated - users are able to give feedback on other services they'd like to see integrated.

The web app is still a little sketchy with broken or poorly implemented styling and references to an Android app that doesn't appear to be available anywhere, suggesting that an Android app may soon be released allowing users to push tasks directly to their phones without SMS or Email.

When signing up, Microsoft requires you to sign a disclaimer that mentions how some "data may be retained by Microsoft for up to 1 year for product improvement purposes," so that's worth keeping an eye out for.

You can check out Conditional Action Programmer here.