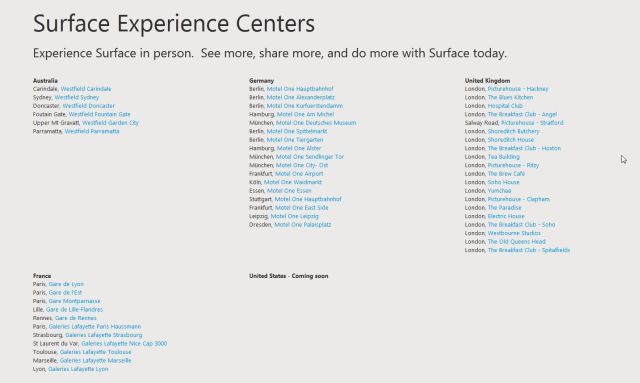 While there are now 60 permanent and temporary Microsoft Stores now open in the US and Canada, there are no such stores that are available in other parts of the world. However, Microsoft still wants people in other countries to at least go hands-on with their new Surface tablet before purchasing the Windows RT device online.

Today, Microsoft revealed that it will also open up what it is calling Surface Experience Centers in Australia, Germany, France and the UK. There will be a total of 54 locations for these centers. It sounds like while people can go hands-on with the Surface at these locales, they won't actually be able to purchase the tablet at these centers. They will have to wait until they go online and buy the Surface from their local Microsoft Store website.

As we reported earlier today, online sales of the Surface have exceeded demand and many models are now taking as long as three weeks to ship after they are ordered.

The Surface Experience Center also has a "coming soon" label for the US so it appears that Microsoft will be opening up these "experiences" in this country at some point, showing the Surface beyond its Microsoft Stores. We will post an update when these location in the US are revealed.