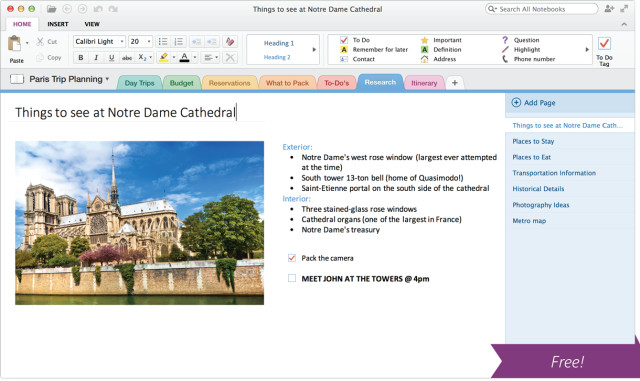 The rumors that Microsoft was planning to launch a OneNote app for Mac users are indeed correct. The company announced today that its popular note taking software is now available for free to download from the Mac App Store.

As with the other versions of OneNote, the Mac version utilizes the familiar ribbon UI. Microsoft states:

Your notes can be styled however you like. You can choose that special font and color you like to use for your notes, or emphasize important content with bold, underline or highlights.

In addition, Microsoft announced that desktop Windows users can also download and use a stand alone OneNote app for the first time. While its core features will be free to use, there will be premium features for Office 365 and Office 2013 owners such as SharePoint support, version history, Outlook integration and more.

Finally, Microsoft is introducing a new API that will allow third party developers to incorporate OneNote features in their apps. Some of them have already been released, such as Feedly, Genius Scan, News360, Weave News Reader and more. Microsoft has also released some of its own OneNote supported apps such as Office Lens, which scans pictures with text and puts those words into the app, and OneNote Clipper, which saves webpage content on the app.