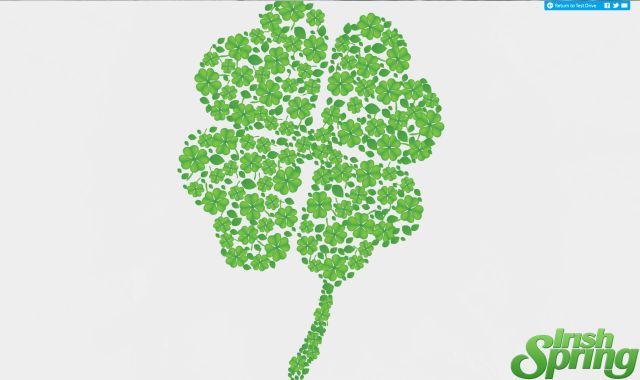 Tomorrow the whole world becomes Irish for one day as we celebrate St. Patrick's Day by wearing green, going to parades and, if you are over 21 in the US, having a few pints of beer. Microsoft has decided to start celebrating the day a little early via a new web site designed to showcase the features of Internet Explorer 10 in Windows 8.

The Irish Spring web site is similar to other Microsoft web sites launched for Christmas and Valentine's Day in that they are created to show off the hardware accelerated HTML5 features that web site creators can use for browsers such as Internet Explorer 10. If you are using IE 10 with a Windows 8 touch screen device, you can use your finger to manipulate the four leaf clover. You can also do it the old fashioned way with the mouse cursor if you have a mouse and keyboard set up.

The official Internet Explorer developer web blog warns that using browsers other than IE 9 or IE 10 won't work as well. Indeed, we tried and failed to view the Irish Spring site using Firefox. Safari worked but the site performance slowed to a crawl but Chrome handled the Irish Sprint site pretty well.