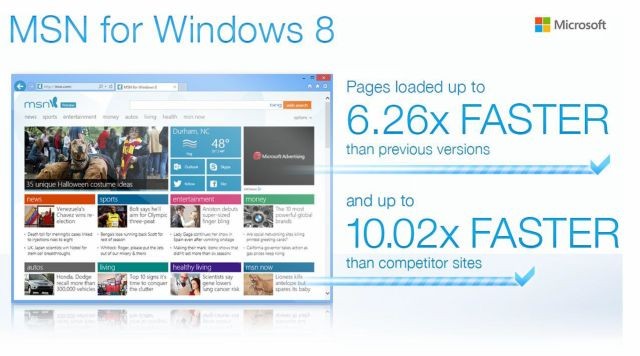 Microsoft launched the Windows 8-exclusive version of its MSN website a few days before the official launch of Windows 8 itself in late October. Microsoft said it created the Windows 8 version to load much faster under Internet Explorer 10 compared to older versions of the site.

But just how much faster is the new MSN on Windows 8 compared to other competing sites such as AOL, Yahoo and others? Today, Microsoft said that it decided to commission an outside independent study on the matter and recruited Principal Technologies to handle the work.

The study's results show that not only does MSN on Windows 8 load more than six times faster on IE10 compared to older versions of the site, but that it loads up to 10 times faster than competing sites. Microsoft says, "Because Internet Explorer 10 was designed to take advantage of the system architecture of Windows 8, rendering complex page layouts and high resolution images is faster and more fluidly."

The study also breaks down how specific MSN hub pages for topics like News, Sports and others load on Windows 8 compared to other sites. For example, the study claims that MSN's news page on Windows 8 loads up 1.91 times faster than CNN.com, 4.03 percent than the Huffington Post and 6.58 times faster than ABCNews' website