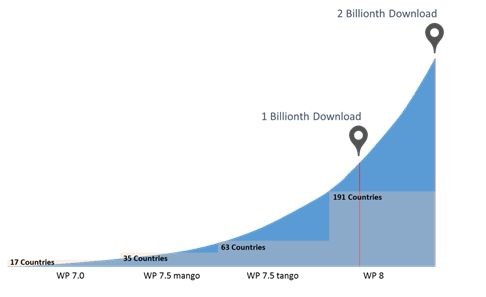 Sales of Windows Phone products have been increasing in the last few months, thanks in part to the success of new Lumia models from Nokia. Today, the general manager of Microsoft's Windows Phone apps and store operations, Todd Brix, offered up an update on how how many downloads the app store has experienced recently.

In addition to the increase in app downloads, Brix said Microsoft is adding six new markets that will allow developers to receive revenue from their Windows Phone apps (Costa Rica, Cyprus, Kazakhstan, Lebanon, Malta, and Trinidad and Tobago) bringing the total to 128 markets. He added:

After this change is implemented, developers in these 6 markets will be able to submit both free and paid apps to the Windows Phone Store to reach users in 191 markets. We also continue to add carrier billing connections. We now offer 35 connections in 23 markets, with new connections growing at a rapid pace. On average, developers are earning 3 times more revenue per active user in markets where carrier billing is offered. This increases to 6 times more revenue on average in emerging markets where credit card usage is more limited.

Developers should also have an easier time in submitting Windows Phone apps. Brix said that starting today, any developer can unlock and register one Windows Phone device so they can load up to two apps on the phone. Developers with official Dev Center accounts can still unlock up to three phones to load up to 10 apps for each phone.

Speaking of the Dev Center, from now until August 26th, developers can sign up to get an annual account for that service for just $19. The Dev Center has also added a new feature where developers can chat live with a support representative on Monday-Friday from 9 am-9 pm Eastern time.