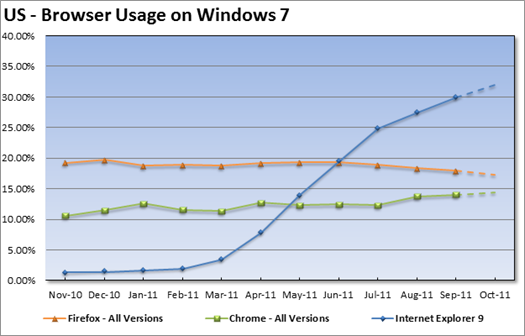 Microsoft has decided not to wait until the end of the month to do a little bragging about the growth of its Internet Explorer 9 web browser on Windows 7 PCs. The company updated the official IE blog earlier today with the prediction that "as early as next month, IE9 on Windows 7 could be the leading modern browser behind IE8."

Microsoft is getting its info from NetMarketShare.com, which tracks the use of web browsers, among other things, around the world. According to Microsoft's spin of the numbers, IE9 continues to gain ground on Windows 7-based PCs compared to its biggest rivals, Mozilla's Firefox and Google's Chrome, both worldwide as well as here in the US.

Microsoft has been pushing for users to dump older versions of its older Internet Explorer browser for two big reasons; one is that older browsers tend to be less secure than the newer versions. The other is that the smaller the market for older browsers, the more that web designers can put in more advanced features on their web sites that support the more advanced browsers.

Considering that there are a ton of web browsers for PC users to download, the fact that IE9 is apparently being used more and more by Windows 7 users is interesting. Of course there are still a lot of older PCs that run older operating systems, particularly Windows XP, and it may be a little while longer before that situation changes.