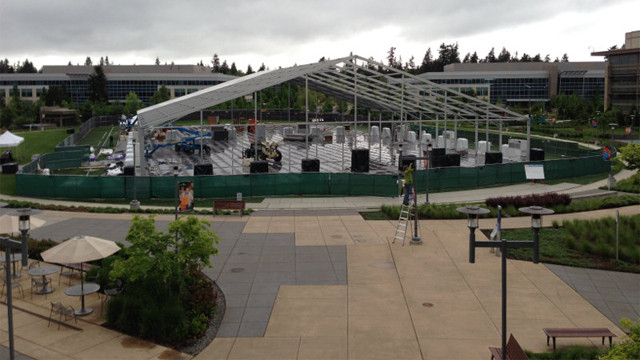 Microsoft's reveal of the next-generation Xbox gaming console is about a week away, and the company is already preparing its Redmond, Wash., headquarters for the event by building a temporary facility.

Larry Hryb, Microsoft's director of programming for Xbox Live who is better known as "Major Nelson," showed his Twitter followers the temporary structure, seen above, that will be used for the May 21 event. The event will be relatively small in size, as Microsoft was stringent with what media outlets it is allowing to the event. A larger event for the console will take place at Microsoft's pre-E3 press conference on June 10, where Neowin will be in attendance.

Though several leaks have already revealed the purported specifications for the device, much of the console's media capabilities beyond gaming remain more mysterious. It's believed the console will work with set-top boxes from television service providers, for instance, to integrate live programming with the Xbox's interface. The console is also rumored to launch bundled with a next-generation Kinect, which will reportedly play a bigger role in how the console is used.

Previous speculation that the new console will require a persistent Internet connection was rebuked in a leaked memo, though the same memo implied strong ties to Internet-enabled activities that go beyond gaming and television.

The next-generation Xbox announcement will be televised live on Spike TV and streamed on Xbox Live and Xbox.com.