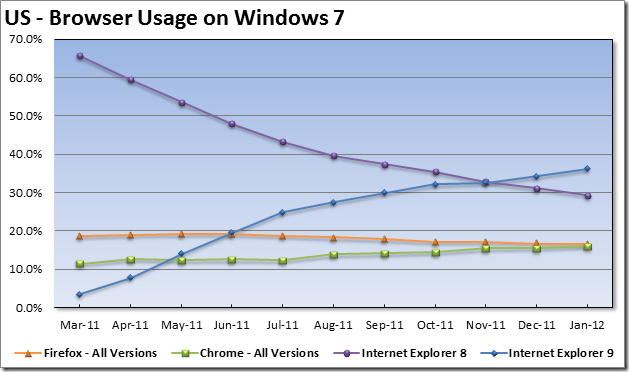 Microsoft is promoting even more gains in users of its Internet Explorer 9 web browser. In a new blog post, Microsoft said that according to data from Net Applications, IE9's market share in the US on Windows 7-based PCs went up to 36.2 percent in January. In comparison, IE8's market share dipped down below 30 percent in that same month. The market share for both Mozilla's Firefox and Google's Chrome web browsers are holding steady at below 20 percent each.

Even with these new gains, Net Applications still shows that overall, Internet Explorer 8 is the most used web browser worldwide at 27.45 percent. Google's Chrome is second at 15.90 percent, followed by IE9 at 11.64 percent and Firefox at 8.51 percent.

Internet Explorer 6 and IE7 are still being used by a fair fraction of web browser users. Net Applications shows that IE6 has a 7.93 percentage share worldwide while IE7 has a 4.90 percent share of the browser audience. Microsoft has been trying to get businesses and individuals to stop using IE6 in favor of more modern web browsers. In January, Microsoft announced that IE6's market share had dropped down to below 1 percent in the US.

Of course, Microsoft is already working on Internet Explorer 10, which is expected to launch sometime around the launch of the Windows 8 operating system later in 2012.