Microsoft has announced their Q3 earnings (first quarter on a calendar year) today with revenues of $21.7 billion. Gross margin, operating income, and diluted earnings per share (“EPS”) for the quarter were $14.6 billion, $6.6 billion, and $0.61 per share, respectively; profit was down 12% for the quarter when compared to the same quarter last year.

These figures include $190 million of integration and restructuring expenses from their layoffs that resulted in $0.01 hit to the EPS.

The company's Device and Consumer business unit revenue grew 8% to $9.0 billion with Office 365 Consumer subscribers growing to over 12.4 million users. The Surface line had revenue of $713 million, up 44% (year-over-year) driven by Surface Pro 3 but notably it did not surpass the billion dollar mark like last quarter. 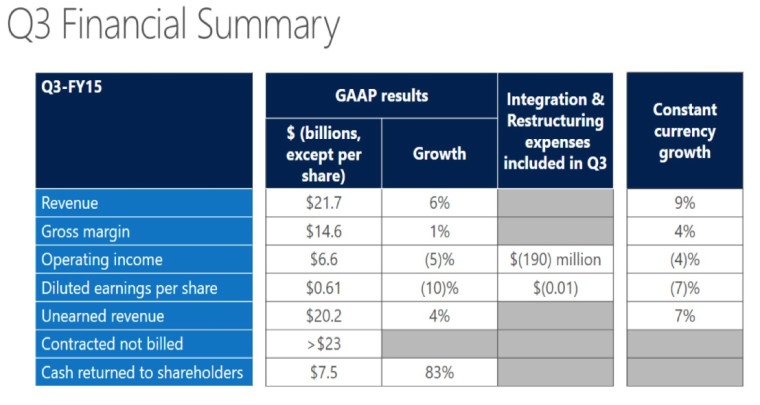 The company said that they sold 8.6 million Lumias this quarter with revenues of $1.4 billion; this is a revenue decline of 16%. The company says this is mostly due to IP licensing revenue being down because of low royalty devices. But, With 8.6 million phones sold, this is an 18% increase over the prior year; so they did sell more smartphones this quarter. Of non-Lumia devices, they sold 24.7 million phones but the company expects this number to continue to decline as the feature phone market contracts.

On the Xbox side, the company said that Live usage grew over 30%; the company did not disclose Xbox sales figures.

For Bing, Microsoft says that they now have 20.1% of the US market share and that search advertising revenue is up 21% because of increased search volume.

Overall, it was a strong quarter for Microsoft but it's not all great news as the Operating Income margins were down which means they made less profit on the cash they did pull in. Still, when you are making 21.7 billion in a quarter, you don't need a high margin to create a lot of capital that you can reinvest into the company.