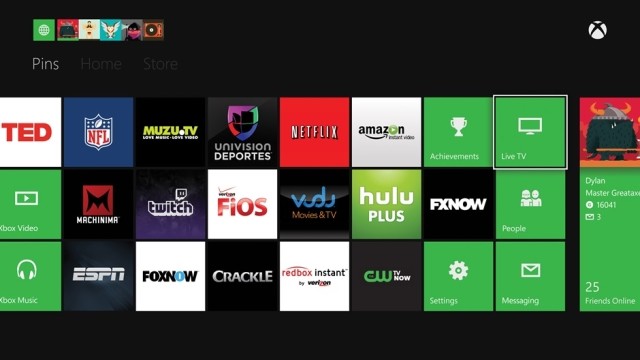 Microsoft has revealed the first wave of entertainment and TV apps scheduled to launch alongside its upcoming Xbox One console or by spring 2014, setting the tempo for what will perhaps be the most entertainment-oriented console ever.

According to a blog post announcing the lineup on Xbox Wire, Microsoft's official Xbox news website, each of the 13 launch markets for the console will have several apps at launch. The U.S. leads all markets with 19 such apps for the release time frame, though all launch markets – including Australia, Austria, Brazil, Canada, France, Germany, Ireland, Italy, Mexico, New Zealand, Spain and the U.K. – will have at least five apps.

The U.S. market's first wave of entertainment apps for Xbox One is as follows:

The post notes that HBO Go is "coming soon," indicating it's one of the apps that won't be ready for launch. All the apps require an Xbox Live Gold account to use, keeping Microsoft's app policy from its current-generation Xbox 360 console. In addition to the entertainment apps, Microsoft's upcoming console also has the ability to pull video from set-top boxes through the use of an HDMI-in port.

Microsoft's post notes that the lineup doesn't include its own offerings, such as Xbox Fitness, Xbox Music, Xbox Video, Internet Explorer, SkyDrive, Skype and Upload. Notably, no social media apps are listed, and the NFL app won't receive Twitter integration until sometime next year. Microsoft's in-house Facebook and Twitter apps were two of the first for the Xbox 360, though the company removed the apps in 2012.

The majority of apps currently available on the Xbox 360 will receive Xbox One versions in the first wave, though several TV stations, such as Syfy, aren't listed. Also notably absent from the list is YouTube. Microsoft and Google have fought over the release of a Microsoft-developed YouTube app for Windows Phone for the past year, and Google has refused to release more apps for Microsoft platforms beyond its currently available apps, such as a Google search app for Windows 8.