Microsoft just recently announced that there would be 2000 apps ready for WP7 upon launch. In all of this hype for the unveiling event tomorrow, the company threw some popular game titles on their website that would be featured on the device. One of these games was "Angry Birds" but the creator, Rovio Mobile stated that they are not committed to creating the popular game for Windows Phone 7. 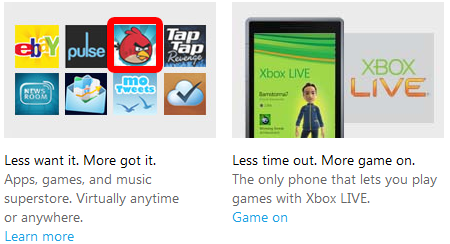 The icon, which was spotted by WMPoweruser drew attention to which Rovio replied in a tweet, "Microsoft put the Angry Birds icon on their site without our permission."  Microsoft responded to the tweet saying that the site was not supposed to be live, and that the Angry Birds icon was in the mix by mistake. Despite this "mistake," the icon remains on the bottom of the Windows Phone 7 Tips and Tricks page, although since this writing it has been removed and then added back in.

Rovio Mobile say they have not committed to doing a Windows Phone 7 version, but mention that they could do one. They are going to wait and see if the platform gains enough support to justify porting the application. Angry Birds is coming to Android this week, and it is already available on the iPhone and iPod Touch. Plans for a Windows Phone 7 version still remain to be seen.