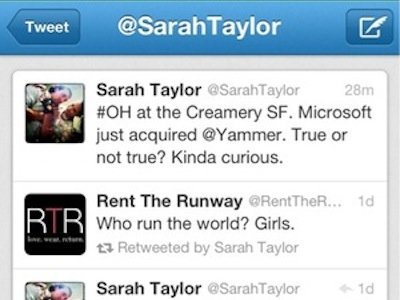 The tweet which first suggested this to be the case came from @SarahTaylor, who has since deleted it. It was posted from inside the Creamery cafe, across the street from Yammer's offices. From inside the cafe, Sarah Taylor overheard employees discussing the takeover. If employees themselves are aware of Microsoft's intentions then it may be a low-key affair which was not intended to make major news, at least not yet.

Yammer is a fairly new social network, having launched in 2008. By way of comparison, LinkedIn has been usable since 2003. Yammer functions like a business version of Facebook, right down to a similar UI. Yammer also is focused upon people already working in an industry, rather than providing for those seeking jobs as well. Demonstrating this point, Yammer will not allow you to sign up from an email account which is not related to the domain of the company you're listing yourself as an employee for.

In 2010, TechCrunch indicated Yammer was in use by 80% of Fortune 500 companies. Months before, Yammer CEO David Sacks said the number was at 70% of Fortune 500 companies. Adoption of Yammer appeared to be growing at this point, with the service's design having been improved upon through regular updates. The service has generated $142 million in funding from investors, garnering praise for its capability as a business version of Facebook.

Microsoft could be weighing up a purchase of the social network now. Yammer has boasted integration with Microsoft's SharePoint since 2010, so the two already have a link. The rumor mill suggests that Microsoft could be considering purchasing Yammer outright, for $1 billion. In February 2012, Yammer was valued at being worth $500,000,000, so a takeover bid could be worth more still. Ownership of Yammer could give Microsoft a boost into the world of corporate social networking. At present the company is already responsible for the So.cl social network, which is not primarily intended for business.

With both the possibility of a Yammer buyout, and Microsoft having considered the purchase of Nokia, the company could be interested in expanding in numerous fields.