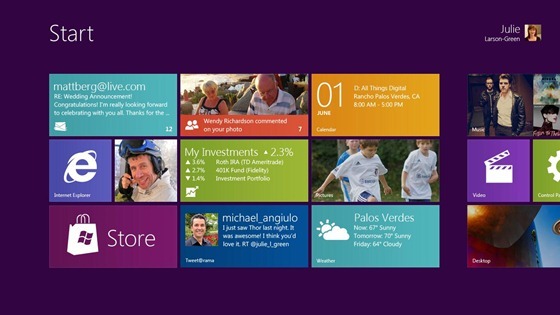 Microsoft continues to update its official Windows 8 developer blog with new entries about its upcoming next version of its Windows operating system. Today's newest blog entry takes a closer look at Windows 8's user interface, or rather its two user interfaces. The most talked about part of the new UI is called "Metro" which is the highly graphical design that is pictured above and is made to be used primarily for touch screens devices. Microsoft also has the more traditional PC-based user interface that will be more familiar to previous Windows users when they check out their files and folders.

But why have both kinds for this one operating system? According to Microsoft's Steven Sinofsky, "Having both of user interfaces together harmoniously is an important part of Windows 8." One of the reasons for having two kinds of UI is the success of Windows 7. Sinofsky says, "Hundreds of millions of people rely on the Windows 7 UI and existing Windows apps and devices every day, and would value (and expect) us to bring forward aspects of that experience to their next PCs."

While there is an argument to be made to start completely over and launch Windows 8 with just the graphical Metro UI, Microsoft decided against that. Sinofsky says, "We chose to take the approach of building a design without compromise. A design that truly affords you the best of the two worlds we see today. Our perspective rests on the foundation of the open PC architecture that has proven flexible and adaptable over many significant changes in hardware capabilities and software paradigms.  This is the flexibility that has served as a cornerstone through transitions in user interface, connectivity, programming models, and hardware capabilities (to name a few)."

He adds, "If you want to, you can seamlessly switch between Metro style apps and the improved Windows desktop. Existing apps, devices, and tools all remain and are improved in Windows 8. On the other hand, if you prefer to immerse yourself in only Metro style apps (and platform) and the new user experience, you can do that as well!"

More information on Windows 8 is expected to be revealed at Microsoft BUILD Conference in Anaheim, California in mid-September.