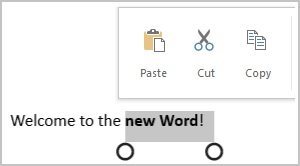 With the release of the Office 2013 preview version a few weeks ago, Microsoft hyped up the touch screen-based features in the productivity software suite. However, Microsoft couldn't just adapt its current mouse and keyboard code to support touch screens in Office 2013, especially for the popular Word software program.

In a new post on the official Word blog, Microsoft goes over how it put in touch-based features in Word 2013. It used an example to show how hard it would be to adapt mouse controls for touch devices:

Microsoft said it created a new way to navigate through Word documents on touch screens. Word 2013 automatically adjusts the content of a Word document to fit a window. The blog says that Microsoft set up a way for users to access a "zoom overlay" that previews what the text in the document will look like before pinching it with fingers on a touch screen product.

The Word team also worked with the Microsoft Excel team in offering Word 2013 users selection handles that, which used on a touch screen, can select cells, rows and columns on a table. The blog adds, "For figures, we added in live layout and the ability to drill into complex figures such as charts and SmartArt. We also made the handles larger on figures, so you can more easily grab them to resize or rotate."

And what if a user is typing on a virtual keyboard while using Word 2013? Microsoft states, "Now, Word can figure out exactly where the keyboard is and automatically adjust the content to stay above the keyboard. This allows you to type a lengthier memo without needing to manually scroll the document."