Earlier today, it was revealed that Microsoft accessed the email of an unnamed blogger's Hotmail account to find the source of Windows 8 code leaks, The revelation raised questions about the privacy of all Hotmail or Outlook.com emails, even though Microsoft's own Terms of Service state flat out that the company does have the right to search those accounts if it feels such actions will be needed to "protect the rights or property of Microsoft or our customers." 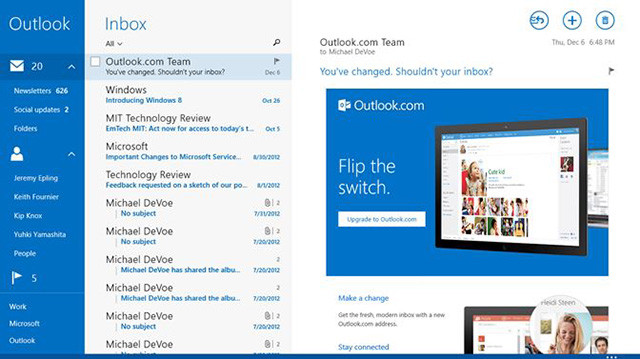 That certainly seems to be the case in this particular instance, but now Microsoft has sent the Re/code website a statement from its Deputy General Counsel John Frank on this matter. Frank says the company will now be adding a couple of extra steps in its policies to make sure that the rights of its Hotmail and Outlook.com customers are protected.

To ensure we comply with the standards applicable to obtaining a court order, we will rely in the first instance on a legal team separate from the internal investigating team to assess the evidence. We will move forward only if that team concludes there is evidence of a crime that would be sufficient to justify a court order, if one were applicable. As an additional step, as we go forward, we will then submit this evidence to an outside attorney who is a former federal judge. We will conduct such a search only if this former judge similarly concludes that there is evidence sufficient for a court order.

Frank says that email searches for information related to company property will not expand to other matters, and such investigations will be supervised by counsel to make sure this rule is followed. Finally, Microsoft will add the number of those particular kinds of searches as part of its bi-annual data transparency report from now on. His statement added, "The privacy of our customers is incredibly important to us, and while we believe our actions in this particular case were appropriate given the specific circumstances, we want to be clear about how we will handle similar situations going forward."