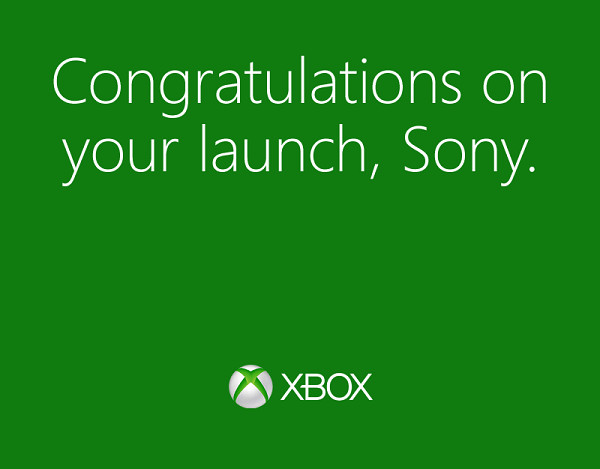 Sony launched its PlayStation 4 console today, to which competitor Microsoft has responded by posting a congratulatory image to the official Xbox page on Facebook for the event.

The company's executives have also been congratulating their Sony counterparts over Twitter in a show of the two sides' friendly competitive spirit on the eve of an impending next-generation console war. Larry "Major Nelson" Hryb, Xbox Live' director of programming, tweeted the following message to Sony's Shuhei Yoshida and Adam Boyes:

Yoshida then responded to the message with a similar message:

@majornelson @PlayStation @amboyes Thanks Larry, your turn next week! :D

Sony will have the chance to return the favor next week when Microsoft's Xbox One launches in the U.S. on Nov. 22.

Source: Xbox on Facebook via Gamespot | Image via Microsoft