This week, Microsoft unveiled its new Surface Studio all-in-one PC, at an event where it also announced details of its upcoming Windows 10 Creators Update. Along with new features to improve communications between friends, family and colleagues, additions to the gaming experience, and a massive 3D overhaul for Paint, there are also more features on the way which Microsoft didn't highlight in its announcement.

One such feature made a fleeting appearance - for only a fraction of a second - in a short video showcasing the Creators Update on its website (visible at the 0:19 mark):

If you blinked and missed it, don't worry - you can see the all-important details in the screenshot below: 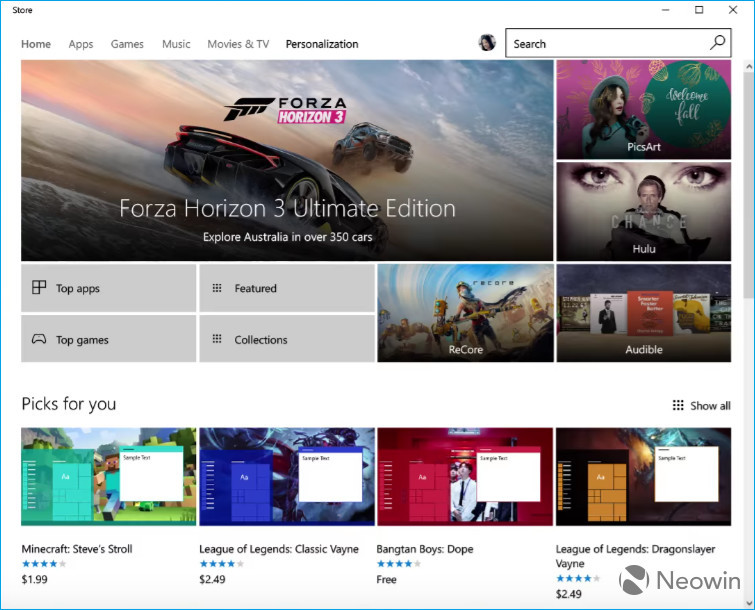 At first glance, it may appear like a screenshot of the current Windows Store, but look a little closer and you'll see some details that you won't find on the Store today.

At the top of the image, there's a new 'Personalization' tab, which is the store section shown in the screenshot itself. Along with what appears to be a selection of recommended apps and games at the top of that page, the lower section is more interesting.

Each of the four 'picks for you' listed there shows different user interface themes for Windows 10, varying by the accent and taskbar color, and desktop wallpaper. From the tiny images shown there, it's not clear if each of these themes offers any other unique features that couldn't be easily configured manually through the Settings app.

Notably, each of the themes also has a price attached, ranging from Free to $2.49. The limited selection of themes shown here makes it impossible to determine if that's the full range of prices, or just how expansive the choice of downloadable themes might be. Similarly, we don't yet know if these themes will be created by Microsoft alone, or if third-parties - perhaps even including developers and enthusiasts - will also be able to submit themes to the Store.

There are still a few months to go before Microsoft rolls out the Windows 10 Creators Update, and those on the Windows Insider Program will no doubt get to try out this new feature, among many others, long before its release.