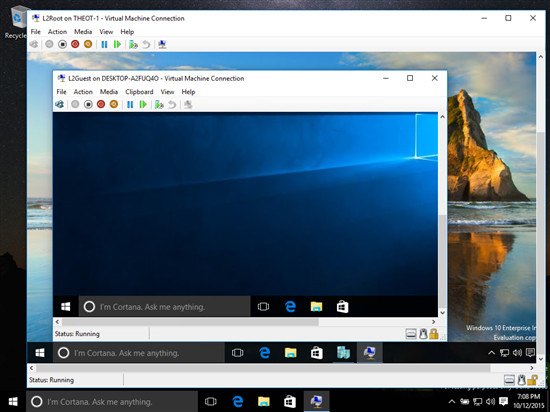 The latest Windows 10 build from Microsoft, 10565, brings a bevvy of improvements to Microsoft Edge, Cortana and the UI in Windows 10. Along with those features, a particularly compelling feature that Microsoft is now beginning to test is nested virtualisation.

Nested virtualisation basically allows you to run a virtual build of Windows 10 inside a virtual machine running another version of Windows 10 that is hosted on your current Windows 10 installation. Simply put, it's like the Windows equivalent of nesting dolls.

In essence, this feature virtualizes certain hardware features that are required to run a hypervisor in a virtual machine.

Hyper-V relies on hardware virtualization support (e.g. Intel VT-x and AMD-V) to run virtual machines. Typically, once Hyper-V is installed, the hypervisor hides this capability from guest virtual machines, preventing guests virtual machines from installing Hyper-V (and many other hypervisors, for that matter).

You can see an example of such an instance in the above image provided by Microsoft, where you can see a total of three different machines being hosted on one computer.

For enterprise users and those who wish to isolate their primary machine from malicious websites and software, this provides a powerful solution to address those concerns - and just looks plain awesome! At the moment, the feature only works with Hyper-V and given that this is still early on in the development cycle, Microsoft is cautioning users to expect many bugs but the result will probably be pretty compelling when finished.