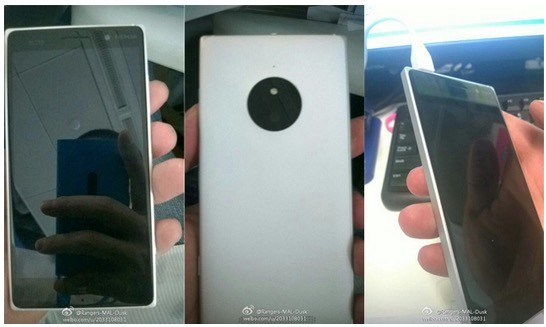 Microsoft's Lumia line of phones make up the largest piece of the market share pie and that's because Nokia's mobility division, before it was bought by Microsoft, was putting out new hardware at a rapid rate.

That trend is still alive after the Microsoft acquisition as you can see the Lumia 830, according to the source, in the leaked photos above. The device appears to have similar lines to that of the Lumia Icon (929) and could be sporting a combination of aluminum and plastic. Based on the images, it's hard to tell the profile of the device is but Nokia's phones aren't generally known to be svelte when it comes to their girth.

As with all hardware coming out of the remains of Nokia, we expect this device to have impeccable build quality, and given its position in the Lumia range, a reasonably high-resolution camera sensor seems likely. The back of the device features a similar look to that of the 1020 but it does not appear to have the same camera.

As with all new Windows Phones, expect this device to ship with Windows Phone 8.1. While there is no information on when this phone might go on-sale, seeing that it is already being assembled and coming off the assembly line, we shouldn't have to wait all that long to learn more about the device.