SwiftKey - which was acquired by Microsoft last year, in a deal estimated to be worth around $250 million - has released a major update for its keyboard app on iOS, bringing a range of improvements and new additions.

SwiftKey uses artificial intelligence and machine learning to assess a user's inputs, to help it continuously improve the quality of its next-word predictions. As part of its latest update, the keyboard now includes a new 'emoji prediction panel', as the company explained today: "Once you’ve typed something and tap the emoji key, you’ll see a selection of 18 emoji that match your sentence, making it faster than ever to find the perfect one to go with any message." 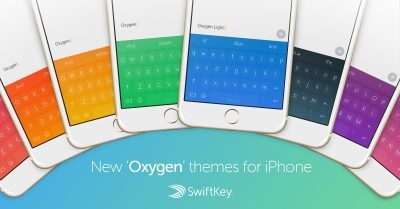 Eight new 'Oxygen themes' are now available for the keyboard in "a spectrum of vibrant colors": Red, Orange, Yellow, Green, Light Blue, Blue, Purple, and Pink. These free themes can be applied to the keyboard via the 'Design' section of the app.

Thanks to your user feedback about the experience of using 3D Touch to trigger cursor control – the ability to swipe to move the cursor – we’ve now made it more responsive. We’ve also introduced haptic feedback for users on iPhone 7 or above – certain keyboard actions, like opening the emoji panel, will give a small vibration feedback.

The keyboard has supported over 100 languages since May, but today's update adds support for 15 more:

You can update SwiftKey on your iPhone, iPad or iPod touch to get the latest features now; or you can download the app from the App Store via the link below.