Sony Mobile has been working on a premium smartphone for quite some time now and we have known it's name to be the LT30, which is most probably heading to the Xperia line-up. Some of the known leaked specifications include a high-definition 720p display and a dual-core 1.5 GHz Snapdragon S4 processor with Android Ice Cream Sandwich out of the box.

Now some new details have come up during the Bluetooth Certification, which include a 13MP rear camera capable of recording 1080p videos with dual channel audio recording and a front HD camera for video chat. It features a 4.6-inch BRAVIA display with a resolution of 1280 x 720. The phone weighs approximately 140g and has a dimension of 68 x 129 x 9 mm. On the design front, the device is ARC shaped with a metal back cover. 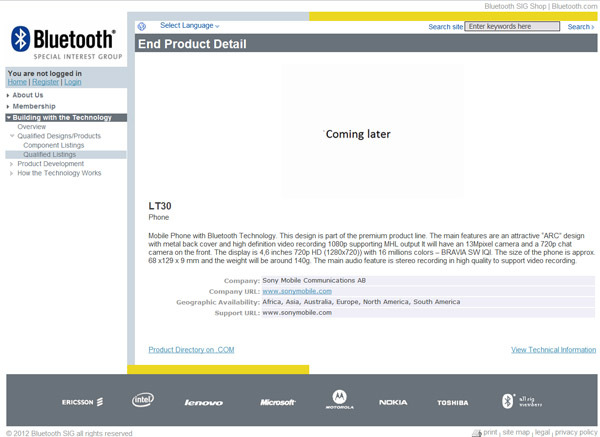 We can expect to see the beauty of the smartphone as soon as Sony plans on announcing the Android device. It would be made available across North America, South America, Asia, Africa and Europe.