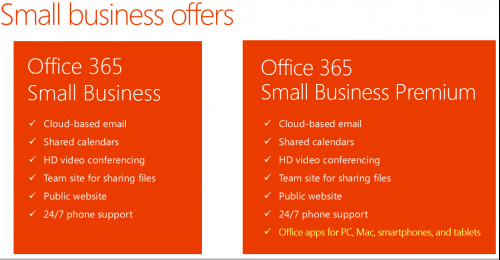 Last week, Microsoft finished work on the RTM build of Office 2013 and it will be made available to some users, such as TechNet and MSDN subscribers, in mid-November, with general availability planned for the first quarter of 2013. That includes new versions of Microsoft Office 365, the subscription-based version of Office.

The article says that the Small Business version will not include support to download Office programs like Word, PowerPoint and more on PCs, Macs, and mobile devices. Users who want that particular feature should go to the Small Business Premium version instead. There's no word yet on pricing for the regular Small Business SDK.

The Midsize Business version of Office 365 will include everything from the Small Business Premium SKU, plus access to programs such as Exchange Online, SharePoint Online and Lync Online. The subscription fee will be $15 a month, or $180 per user.