At the start of March, the Mars 2020 Rover was officially named Perseverance after a naming contest that invited students from across the United States for recommendations. Given the fact that the rover is slated for launch in July this year, final testing and development are currently ongoing in the Kennedy Space Center in Florida.

On March 30, the rover received its flight wheels. While the rover first stood tall on its six wheels back in October, last year, it appears that they were a set of 'flight spares'. That means the initial set would not be making the trip to Mars. 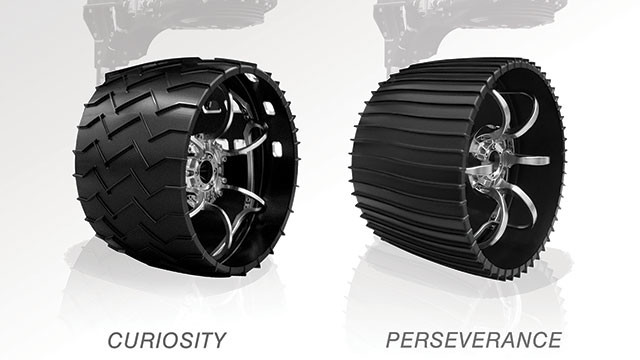 Made with flight-grade aluminum and equipped with titanium spokes, the wheels are re-engineered versions of the ones on NASA's Curiosity Rover. Primarily designed for off-roading, each wheel is slightly larger in diameter and narrower than Curiosity's. They also feature new treads. Compared to Curiosity's 24 chevron-pattern treads, 48 gently curved treads are in place on Perseverance, which can be seen in the picture above.

Extensive testing in the Mars Yard at NASA's Jet Propulsion Laboratory, which built the rover and manages operations, has shown these treads better withstand the pressure from sharp rocks and grip just as well or better than Curiosity's when driving on sand.

Furthermore, the installation of Perseverance's parachute/air brakes to the back shell, was completed on March 26. The new rover weighs a hefty 2,260 pounds (1,025 kilograms) and is the heaviest payload in the history of Mars exploration. The installed parachutes will be tasked to slow down this payload from Mach 1.7 to about 200 mph (320 kph) during the rover's descent on the February 18 landing next year.