According to a tweet from UK television presenter Jonathan Ross, Natal may hit store shelves in October. Ross, who was given some hands-on time with the Xbox add-on, doesn't seem too impressed with Natal thus far, but seems pretty optimistic about the possibilities. Later tweets reveal a video of him trying to play the ball whacking game (see below).

It has been previously mentioned that Natal would ship in November. Perhaps Ross was just saying that all changes to Natal have to be made by October in order for Microsoft to hit the targeted November release. Either that, or he knows something that we don't. Let's hope for the latter. 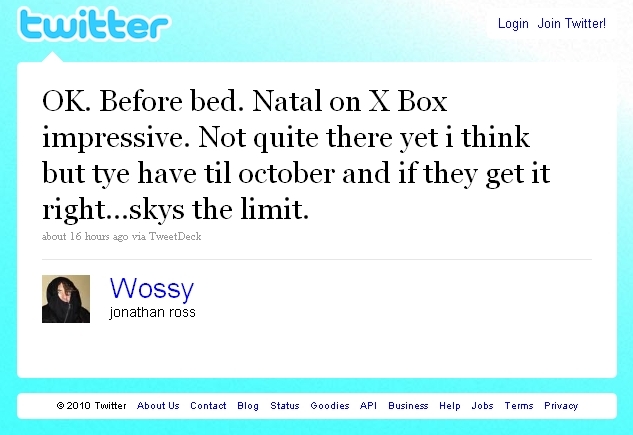 With regards to the actual performance of the motion tracking technology, MTV's Russ Frushtick has recently posted an article about his experiences with it. Sitting through five demos with about 40 different movements, he was able to figure out the average lag exhibited by Natal. The fastest delay was .08 seconds; the slowest was .12 seconds. The consistent average is said to be a tenth of a second. Keep in mind, this was done with a stopwatch, so it's unclear how accurate Frushtick's calculations are.

He notes that the delay is not such a big deal, though users are sure to notice it a tad. He says that the lag could continue to diminish as better firmware is created for the device. In conclusion, he still feels that Natal will be a game changer, similar to the way Nintendo's Wii shook up console gaming. Below is the video of Jonathan Ross swinging away.