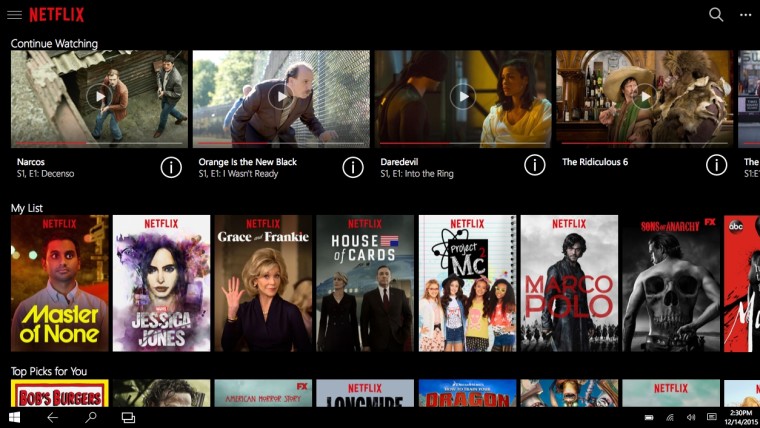 As part of its announcement that it has received over 2.5 billion visits to the Windows Store, Microsoft has revealed that a new Netflix Universal app is now available for Windows 10 PCs and tablets.

The Netflix Universal app introduces an enhanced interface that is optimized for various screen orientations, resolutions and sizes. As shown in the screenshot above, the new app also includes a visually rich presentation where artwork, instead of titles, represent the content displayed within the interface. The navigation experience has also improved when compared with previous versions of the Netflix app and can adapt based on the type of input (e.g., mouse or touch) that is used to access it:

As with most Universal apps already available for Windows 10, the new Netflix Universal app also integrates with Cortana. Users can launch the app with their voice (e.g., "Cortana, launch Netflix") and can also search for content by speaking commands (e.g., "Netflix, search for 'House of Cards'") even when the Netflix app is not active. It also supports different phrases for the same search operations.

The new Netflix Universal app is the latest in a series of Universal apps that have been released this week. While the new app is part of Microsoft's Universal App Platform, support for smartphones is not yet available. However, Netflix expects to add support for these devices in the near future.

You can download the new Netflix Universal app here.