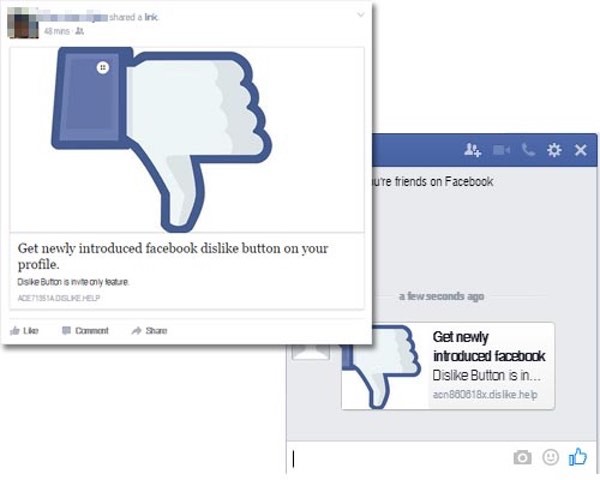 Mark Zuckerberg, CEO of social networking website Facebook, recently gave out a hint that the company is working on a feature that lets you 'dislike' your friends' posts. This is due to an attempt to avoid the awkward "liking" of posts that are sad or in need of empathy. Apparently, this upcoming feature is what led cybercriminals into luring innocent people on the web into a new scam.

According to a report by Hackread, Facebook posts promising users that they will get the 'dislike' button early have made the rounds on the site. The post further states that it is currently an 'invite only' system. The scam also contains links, that when clicked, leads the user to a malicious website. An invitation countdown timer is displayed, prompting the user to complete the requirements in the given time, or risk forfeiting his/her chance of getting an early peek into the 'dislike' button feature. The site will then ask the user to share the scam to Facebook, and also share to 5 conversation groups on Messenger. 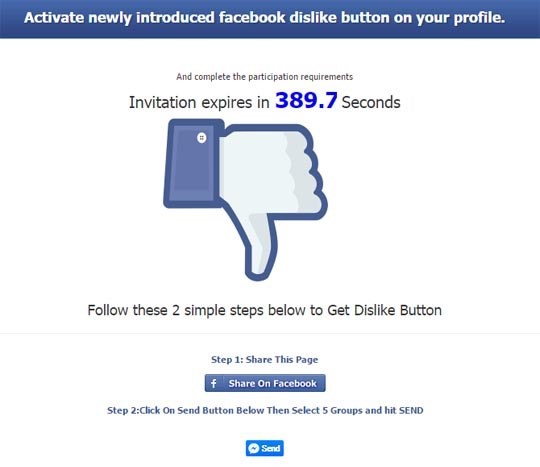 Once all the links are spread, the scam will redirect the user to a new page, where he/she will be asked to fill out a number of surveys, which in turn collect the user's personal information and account credentials. This will then be purportedly used for spamming the user and his/her contacts further through emails. Moreover, it has been reported that some variants of the scam have the ability to install malware on a computer.

It is not yet known how many Facebook users have been affected by this recent online fraud. In the meantime, a word of advice for everyone at Facebook: think twice before clicking on posts that look suspicious, or just too good to be true.

Back in February, a similar internet crime was reported, which featured an alleged video that redirects users to a goo.gl host, which distributes malware for a wide range of devices.

Source and Images via Hackread