iLounge is reporting that they have inside information about brand new models for the iPods, iPhones and iPads from Apple. These products are said to be releasing in late 2010 and early 2011.

The rumored details that there is going to be new iPods on sale as early as this month and as late as next month. There will be 3 new revisions for the music players. One of which is a new version of the iPod Nano, another is a revision of the iPod touch which may incorporate the new changes in the iPhone 4, and another is a 1.7” touchscreen replacement for the iPod Shuffle.

iLounge is also claiming new information about an upcoming iPad mini, with a screen that may be as small as 7”, they have created a mock up image which you can see below. As well as this, they are stating that Apple has moved the release date of the new iPhone forward because of the antennae issues. It is said to be releasing as early as January and will be the full fifth generation iPhone. 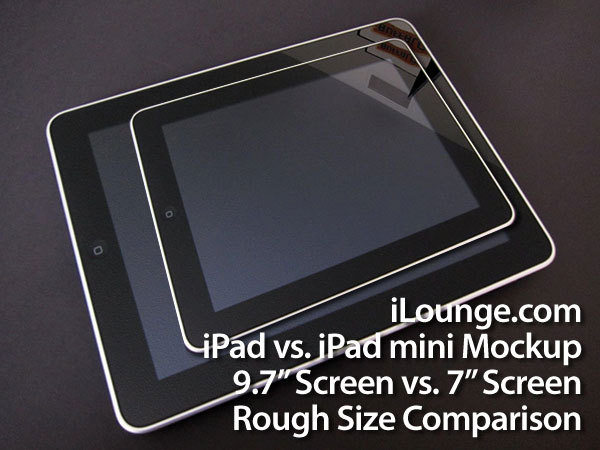 Lastly, they are reporting that their source has info on the new iPhone 4 bumpers. These bumpers will be less expensive version of the current bumpers, to replace the current ones in September. This way saving more money, but still supplying the consumer with a free fix for the issue involving the antenna.

These must be taken with a 'grain of salt' as iLounge said, but if they are true, we will be seeing the new iPods very soon.