Sharing information is a core feature of Office 2013, which became available for everyone to use earlier this month in a preview version. One of the applications in Office 2013 is the new version of SharePoint, which includes a way to create pages for teams to share and update information about projects. 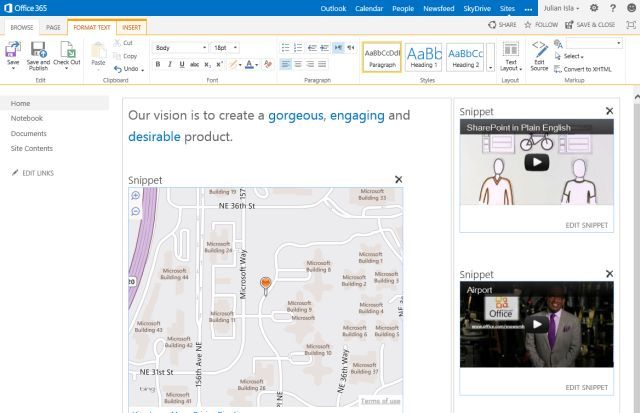 After that, users will likely want to upload documents to the SharePoint team page. The new version lets users preview a document, along with adding features such as informing people if the document has been changed and by whom. There's also a Sync button in the new SharePoint that automatically synchronizes all of the documents on the page with a user's home PC. Microsoft states, "Once you sync a library, you can access all of the files in it from Windows Explorer and Office even if you don’t have an internet connection."

Users of another Microsoft Office software app, OneNote, will find that SharePoint pages also have a OneNote notebook that's been placed all team pages. Microsoft states, "From there you can open the site notebook in OneNote on your PC, Mac or mobile device and it’ll be available offline and stay in sync automatically."

There are also other features that can be added later to a SharePoint page, including Tasks and Calendar and an Add an App function. Microsoft has also put in a new feature called Site Mailbox. The blog states, "It’s a shared inbox in Microsoft Exchange that all the members of your site can access. Again, we’ll discuss this at length in a future post."