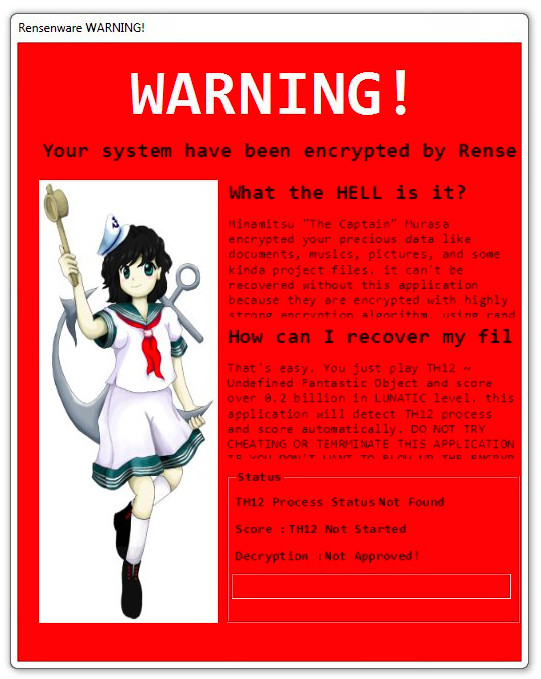 Ransomware has been a fairly common topic when it comes to the front page and forums of Neowin. The program will often infect the host, encrypt precious data, and demand payment for the information to be released. While there have been successes in the past via free decryption tools, it is still a hit or miss scenario when one falls victim to infection. While we might not have blinked an eye in regards to another report of ransomware, it appears that this new one is a bit different.

"Rensenware" will encrypt your data, but instead of asking for your money, it will instead ask you to play a video game and gain a high score. Now, this might seem like a fairly easy task, but the game it asks you to play is called Touhou Seirensen ~ Undefined Fantastic Object. If the game sounds unfamiliar, don't worry, it probably isn't something you'd pick up on a regular basis.

The title is an aerial shooting game like 1942 but is just slightly more difficult. Typically these titles have been called "shoot 'em up" or "bullet hell" games that test the sanity and skill of the player. If this all sounds foreign, you can take a look at the clip below to get an idea of how a "bullet hell" game works.

While this program would normally float around the internet, infecting people, with its creator never being revealed this story is, again, a bit different. After "Rensenware" was made public, its creator came forward to apologize and explain that it was made as a joke and wasn't meant to harm anyone. The creator has released a tool for anyone infected that will decrypt the data. Naturally, while sometimes having a bit of fun is okay, it becomes a bit problematic once it inflicts harm on others.