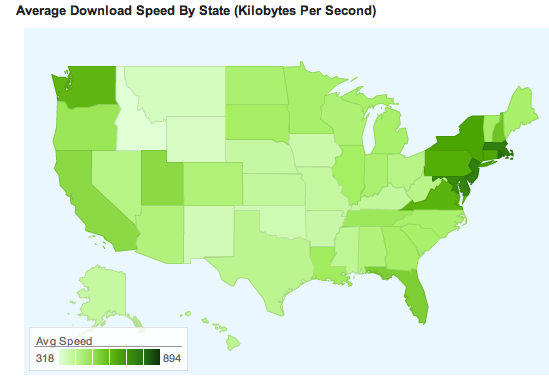 Just how fast is the Internet where you live in the United States? According to a new study released today by Pando Networks it depends. The report, which was released today, was conducted by the New York City-based company that helps to speed up downloads for games and other software. Pando Networks said that it checked out the speeds of four million downloads between January and June 2011.

If you happen to live in the state of Rhode Island, congratulations. Pando Networks says that according to its survey residents of that Northeast state have average download speeds of 894 Kbps, making Rhode Island the location for the fastest Internet download speeds in the US. If you live in Idaho your average net speeds are the slowest in the nation. Pando Networks says residents of that state have average speeds of just 318 KBps.

The study also showed the average download speeds of various ISPs. Comcast was on top with 890 KBps while Time Warner Cable's Road Runner service was slowest at 673 KBps. AT&T had the highest speed among wireless carriers at 416 KBps with Alltel the slowest at a mere 155KBps.