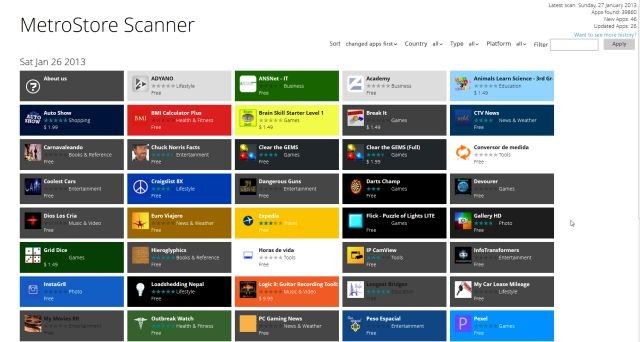 On October 26th, the launch date for Windows 8, the Windows Store had about 9,000 apps available for download, according to third party sources. While Microsoft has still not issued any official Windows 8 app numbers of its own, the MetroStore Scanner website, which allows non-Windows 8 PC users to check out what's available in the Windows Store, indicated that on December 27th, the worldwide total of apps in the store had exploded in the next two months to over 35,000 apps.

It's been a month since our last Windows 8 app numbers report and today we checked out the MetroStore Scanner site to get an update. We found that the number of new Windows 8 apps that have been added to the store has slowed down considerably in the last 31 days. MetroStore Scanner shows that only about 4,000 new apps have been added to the store in the last month.  Currently, the worldwide numbers in the store, according to this source, stand at 39,860.

The number of Windows 8 apps made specifically for the US market now stands at 26,293, according to MetroStore Scanner. Again, that number is about 4,000 more compared to December's stats. China currently has the largest number of localized Windows 8 apps with 27,968 apps in the Windows Store.

It's more than possible than we could see the growth in Windows 8 app numbers accelerate again, especially if the upcoming launch of Microsoft's Surface Pro tablet turns out to be highly successful.