During this morning's press event for the Surface Pro 3, Microsoft showed off some upcoming Windows 8.1 apps that will be optimized to work with the screen and the pen made for the larger 12 inch tablets. One of them is a version of Adobe's Photoshop CC. 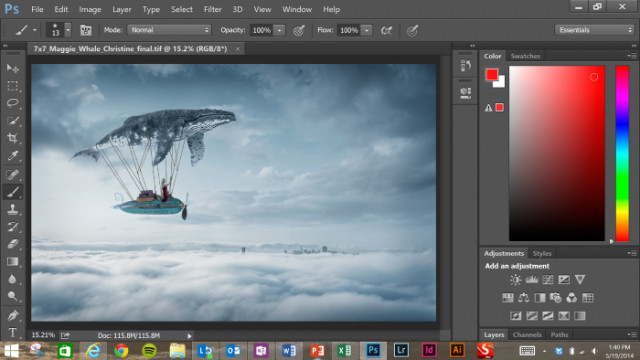 In a post on the official Surface blog, Microsoft expanded on the press event demo for Photoshop CC. This new touch-based version of the popular photo editing software is the result of a partnership between Microsoft and Adobe "to bring the full power of Adobe’s Creative Cloud to a powerful mobile experience optimized for touch and pen."

The Surface Pen accessory should be more accurate on the Surface Pro 3 in Photoshop CC than the Surface Pro 2, according to Microsoft. That's because the software will support higher frequency sampling. Also, there will be better controls made for accessing the app with the fingers on the touch screen. The blog states:

Pinch and zoom with your fingers or pan using two fingers on the screen. You can zoom and pan or zoom and rotate at the same time by coming gestures. Beyond these, by holding your fingers down on the screen for a few seconds, you can also move the canvas around in a completely free form way, just like moving a piece of paper around on a desk.

The icons and touch targets on Photoshop CC will also be 200 percent larger than the previous versions of the software for better access with touchscreens like the Surface Pro 3. So far, there's no word on when this touch optimized version of the software will be released.

In another blog post, Microsoft said that The New York Times will release a crossword puzzle app with an "exclusive pen experience" for the Surface Pro 3, along with a version of the screenwriter software program Final Draft. Again, these apps will join others optimized for the Surface Pro 3 sometime later this year but specific release dates were not announced.