If you play a lot of games online on your Xbox 360 but always thought you had the skills to "go pro", today may be the day you can prove it. Microsoft is working with Virgin Gaming to launch the Xbox Tournaments apps, will will offer Xbox Live Gold members a chance to join in online matches with cash prizes. 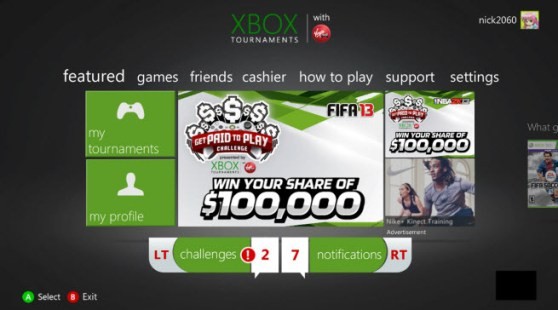 The Xbox Tournament app will launch later today, according to Venture Beat, in the US, Canada and the UK. It's the first time that Xbox 360 gamers will be able to play tournaments run by Virgin Gaming, which is owned by billionaire Richard Branson, directly from an Xbox 360 app. Gamers will first have to sign up for an account on the Virgin Gaming website before downloading and signing into the Xbox 360 app.

At first, the Xbox Tournaments app will offer players a chance to compete in matches using the sports games from Electronic Arts, such as Madden NFL 13, FIFA 13, and NHL 13. More games, and more countries, will be added in the coming months. Players can compete in free matches via the app to prepare for the cash tournaments, which will require an entry fee. The first such tournament, with $100,000 in the prize pool, will begin Tuesday.

Microsoft is in full support of the Xbox Tournaments app, with Matthew Bencke, general manager of Xbox Live, quoted as saying, "From the beginning, we’ve wanted to create amazing and accessible gaming experiences for our members and Xbox Tournaments give our customers a new way to play." Virgin Gaming already has 2.5 million players signed up to play in its previous tournaments.