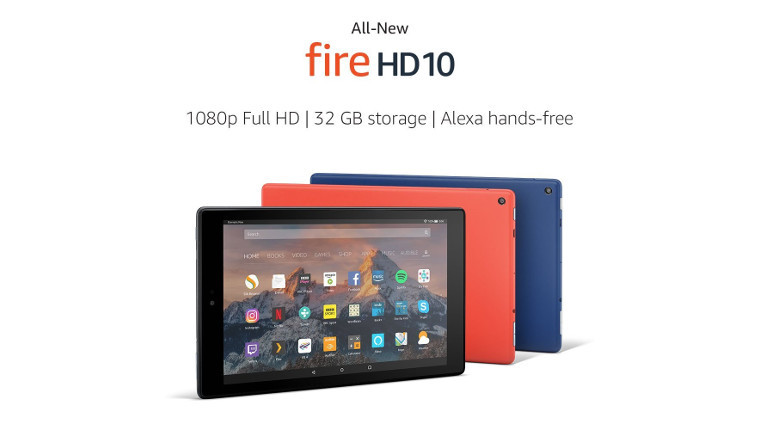 Amazon has announced the all-new Fire HD 10. The company says it is 30% faster than the last generation and supports two times the amount of RAM. With this new device, Amazon, for the first time, introduced Alexa hands-free on a Fire tablet, which allows users activate the assistant with their voices alone.

The $149.99 device includes a 10.1” widescreen 1080p display (1920 x 1200) with over two million pixels (224 ppi). It features a quad-core processor clocked at 1.8GHz and comes with 2GB of RAM which will allow for better performance from the tablet. With regards to storage, you can pick a 32GB or a 64GB model, both of which include support for up to 256GB of expandable storage via microSD and free cloud storage for all Amazon content and photos taken with Fire tablets.

“For less that $150, the all-new Fire HD 10 offers a beautiful 1080p Full HD display, faster performance, more storage, and up to 10 hours of battery life. We’re also excited to introduce Alexa hands-free for the first time on a Fire tablet. Now, you can ask Alexa to play a video, show you your calendar, dim the lights, and much more – using just your voice.”

Getting back to specs, the new Fire HD 10 can run for around 10 hours on a single charge (mixed use) and comes with Dolby Atmos Audio for more immersive and HQ sound. The new tablet also supports the latest Wi-Fi technologies with its out-of-the-box support for dual-band 802.11ac Wi-Fi.

The device is available for pre-order at $149.99 starting today and comes in three colors: Black, Marine Blue, and Punch Red. Device orders will begin shipping out to buyers starting next month, on the 11th of October.