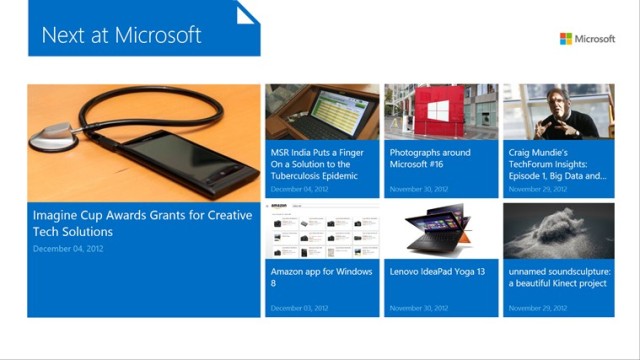 The Next at Microsoft blog is perhaps one of the most interesting ways Microsoft officially communicates to the public. While the blog often repeats what Microsoft has already announced in its official press releases, its main author, Steve Clayton, often puts the spotlight on Microsoft projects that normally would not get a lot of press. A recent example is the demonstration in China of Microsoft's new voice recognition efforts.

This weekend, Clayton announced the launch of the official Next at Microsoft app for Windows 8 and Windows RT devices. The app allows users to access current and past articles on the blog. It also allows users to read stories while they are offline. The Share charm in Windows 8 can be used to share stories with others via Twitter, Facebook and other outlets.

Telling those stories visually has been at the core of Next and the magazine style approach to the blog has been carried over in to the application – I want to make the stories visual and easy to share and I hope you find we’ve achieved that. Performance was also a key goal so you can speed through the content with a flick and not be distracted by unnecessary bells and whistles.

He added that this is just the first version of the Next at Microsoft app and there are plans to put in more features in future updates, including support for live tiles and video along with a way to search though articles.