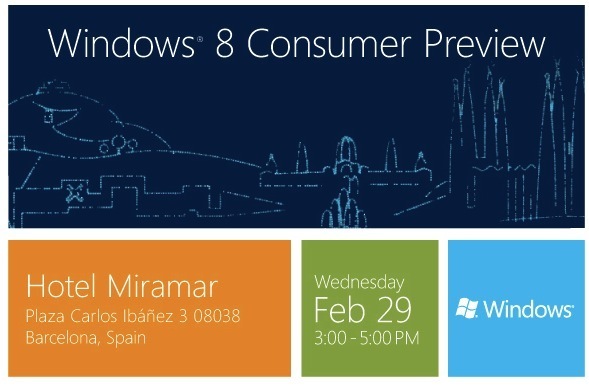 Several weeks ago, Microsoft announced that it would be holding a media event during the World Mobile Congress trade show in Barcelona, Spain on February 29th. The event is supposed to be the launch point for the Consumer Preview version of Windows 8. In the past, Microsoft has held webcasts of major press events so the outside world could see the festivities.

Unfortunately, that won't be the case for this event. Computerworld.com is reporting that Microsoft has decided not to offer a webcast of the Windows 8 Consumer Preview press conference. No reason for this decision was announced.

The event itself will be held at 3 pm local time, which means that it will occur at 9 am Eastern time and 6 am Pacific time. Microsoft is expected to make the Windows 8 Consumer Preview available for download around that time.

So far, there have been no leaks of this new build of Windows 8 beforehand and Microsoft has not officially revealed how or where the Consumer Preview version will be released.

Microsoft launched a Developers Preview version of Windows 8 in September. It was due to expire on March 11 but Microsoft recently extended its deadline to January 15, 2013.