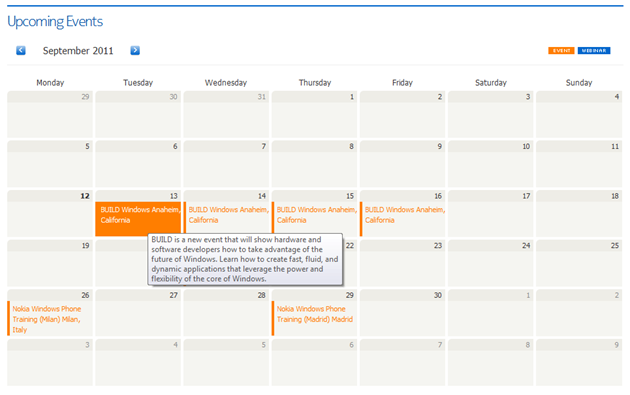 Not long after Microsoft and Nokia announced their partnership, most wanted to know when we would see the hardware hit retail. While that answer is still not known, it looks like Nokia will be at this week’s BUILD conference.

With Nokia coming to BUILD, spotted by MyMicrosoftlife, could this be the time that they finally show off their Windows Phone hardware to the general public? But, according to the company’s event calendar, they do not mention Windows Phone by name.

Nokia could be only going for moral support but many hope to hear about their upcoming plans for Windows Phone hardware. Speculating even further, it could be possible that Nokia could make a Windows 8 tablet considering that BUILD is focused on Windows 8. The tablet idea is unconfirmed at this time and is only speculation.

What Nokia is planning to show, or not show, at BUILD this week is still up in the air. This could all be Nokia showing its face with Microsoft to solidify its partnership or Nokia could be there to hopefully show off some hardware.

Nokia is a crucial partner for Microsoft as they have the ability to push Windows Phone into the hands of millions of users. Nokia has been known to produce top quality hardware, but it was always believed that their software was holding them back. With a new OS and fantastic hardware, Nokia is the vendor Microsoft needs to turn the mobile OS tide.