Nokia's been a little quiet on the MeeGo front since Nokia World last week. At a shady booth in the corner, a shiny white N9 was shown off running a newer version of MeeGo -- 1.1 -- but it wasn't entirely clear what was inside. Today, we sat down with Nokia and talked about the future of MeeGo, things that are coming and things that aren't.

Last week in our in-depth N9 review we praised the device, although it let us down in terms of speed. Especially in some applications, such as Facebook and Twitter. N9 owners and potential owners, rejoice! The 1.1 update delivers huge performance improvements, it seems like the random slow downs that plagued us have disappeared and the Facebook / Twitter applications are useful again. It might be time to ditch the web Facebook bookmark.

Notifications are a lot less vague now, too. Previously a green flag would show up in the notification tray, meaning there was some sort of notification. In 1.1, this has been revised and it now displays the specific icon for the notification; Email, chat, message, call, etc. They're also right aligned on the standby screen now, for those that are bugged by that sort of thing.

Music controls do now show up on the home screen, as advertised, but only when the music application is open. If it's closed, the lock screen goes back to a clock. As we noted in our review, Twitter photo posting was missing previously; this has now been added too.

Other small things include the ability to pinch-zoom the application cards to make them bigger or smaller, NFC tag support, OS-wide copy and paste, and a ton of bug fixes. When we were shown the device the performance increases were extremely clear, having lots of applications open no longer causes a problem, unlike the original release that would begin to lag pretty quickly at 4 or more applications open at the same time.

NFC tag support works brilliantly, in our demonstration it was a NFC-enabled business card. Holding it to the device allowed it to get all the data from the card, no prompts or silly pairing. It just works.

There's also even more in 1.1, but Nokia isn't willing to discuss it until closer to the release time. We'll have to sit on our fingers for now.

There was one disappointment, however. The front-facing camera support is still ​not here. You can't make video calls yet. No announcements on when it'll work, either, though Nokia tells us it's "coming." Peregrine promises that they'll support it soon though, so we're crossing our fingers.

The good news: MeeGo Harmattan 1.1 is just around the corner. In fact, Nokia says it'll definitely be out by the end of the year. Now, we know that's a vague estimate, but we were shown the update in action today and it's definitely done -- we wouldn't be surprised if we saw it in a matter of weeks. The update will be available for any N9, no matter the color. Oh, and the white N9 will be coming to market around the same time as the update, at least, that's what we're hearing from other sources.

Looking forward, Nokia says they plan to continue to support the N9 for the foreseeable future, and the company is already working on updates past 1.1. This is great news, and means that the N9 is still being actively worked on, despite it being shoved into a dark corner thanks to the Lumia range. Obviously, plans could change, but for now, Nokia is adamant that it'll continue supporting MeeGo as an "exploratory" market. 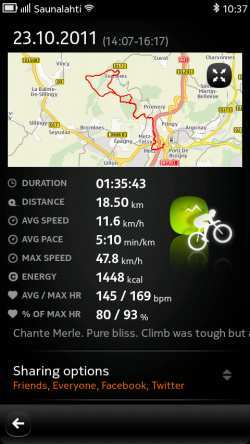 As a bonus, Nokia released a "Sports Tracker" application for the N9 today which is extremely feature rich, and is coming to their Windows Phone offerings during November, too.

​Update: ​For clarity's sake, the update is Harmattan PR1.1 (as previously seen here). We've sourced this information ourselves, so you're hearing it first hand from Nokia. Also, we forgot to mention that full Swype support is coming in this update too. To enable swype, you just swipe across the keyboard to select a new layout.