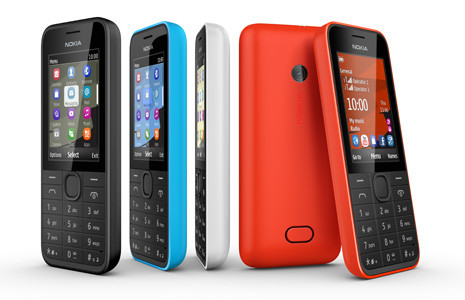 Keeping true to their focus on developing markets Nokia has just unveiled three new feature phones designed to be accessible to anyone on a budget. . And while most of us use smartphones these little devices can come in handy when you need a backup or when you’d rather not risk your $600 phone.

The new devices, named 207, 208 and 208 Dual Sim, follow the same design aesthetics we’ve seen in other Nokia phones, including the Lumia line. With rounded corners, removable back covers and intense candy colors these budget phones are sure to stand out. The 207 and 208 offer an incredible 2.4-inch screen at QVGA resolution, 258 MB of RAM and a 1020 mAh battery. In terms of battery life these little bad boys can outperform any smartphone on the market, with up to 12 hours talk time and a month of standby.

The phones also offer 3G connectivity, a micro USB slot, microSD storage expansion up to 32GB, and the 208 also comes with a 1.2Mpx camera. Worthy of note is that these phones use micro-SIMs so switching between your smartphone and a Nokia 207 will be a piece of cake. Preinstalled apps such as Facebook, Twitter, Whatsapp and Youtube are also included, while browsing is handled by Nokia’s Xpress Browser.

According to Nokia these little phones are “splash-proof” and the keyboard is gapless so there’s no chance of dirt build-up over time. The phones will be available in black, white, red and cyan and you will be able to get one later this year for only $68 off contract.